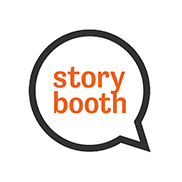 is a YouTube channel dedicated to animating and sharing short stories from various people's lives, usually those of young children and teenagers. Themes range from serious issues like bullying and mass shootings to more lighthearted and even humorous videos about embarrassing events, mistakes or borderline ghost stories.

Unlike many of the similar animated channels inspired by it, Story Booth gets all of its content from its own viewers through submissions, which ensures a higher quality of videos produced and less need to rely on clickbait titles and thumbnails. While Story Booth does have a few outlandish stories most of its videos are firmly grounded in reality and focus on real events that actually happened. Updates occur roughly once a week.

that focuses on various stories and misadventures submitted by college kids. This series contains a bit more mature (though still often humorous) subject matter and is aimed at the older teen and young adult demographic. Tropes for it should go in the appropriate section below.