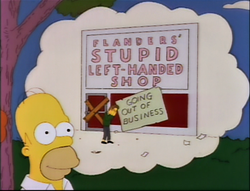 Ned Flanders announces during one of his barbecues that he's quitting his job as a pharmacist and going into business for himself by running a specialty store catering to the left-handed, but Homer's jealousy (and a wishbone wish) drive Flanders' business into the ground. Meanwhile, Marge encourages Bart to do other things with his time rather than watch TV, so Bart takes karate lessons — and skips them for time at the arcade.