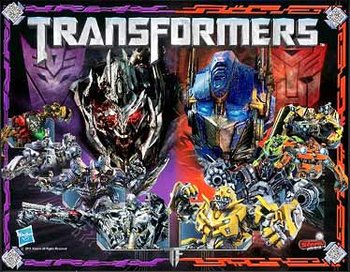 Transformers is a 2011 Licensed Pinball Table designed by George Gomez for Stern Pinball. It is a tie-in to the live-action Transformers film series by Michael Bay, particularly Transformers: Dark of the Moon.

As with the long-running toyline and franchise, this pinball game is about the ongoing civil war between a race of Mechanical Lifeforms, divided into the heroic Autobots and the evil Decepticons. The game begins by throwing you into the fray, requiring you to choose a side to ally with; thus alligned, you must then assemble the five members of your selected faction by completing the Battle Modes for all of them, then lead your forces to engage the turncoat Sentinel Prime. Defeat Sentinel, then take the fight to the members of the opposite side, and fight through them all for a chance to settle the eons-old conflict in the Battle For Cybertron. This is all accompanied with several original musical scores, along with an assortment of voice clips and video footage from the films.

The Transformers pinball was available in several variations — in addition to the standard ("Pro") model, it was available in Autobot, Decepticon, or "Combo" Limited Editions, with different backbox translite and cabinet art, color-coded and laser-etched metalwork, support for a shaker motor, and additional playfield toys, features, and rules. This segmenting between Autobots and Decepticons extends to the game itself, as the player's choice of which side to play altered the rules.

In 2012, Stern produced a home version of this game, the first in their line of "The Pin" consumer tables. However, aside from the property and the artwork, Transformers Pin (later renamed to Transformers: The Pin) has no connection to the original game, using an entirely different cabinet, layout, and rules.

Skids: "It's supposed ta hurt, it's an ass-kicking!"