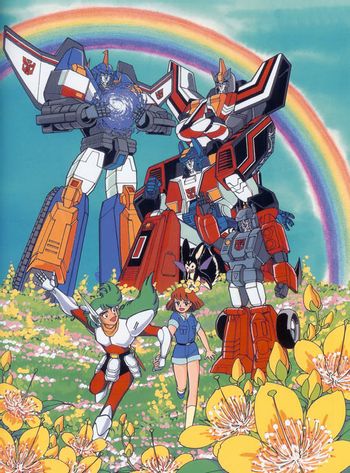 That chick in the hotpants? That's... not a chick.
"You're mine. Don't even bother resisting; you'll only make it worse, and that could be painful."
— Megatron (to Starscream)
Advertisement:

Since Cybertronians are a gender neutral species with a suspiciously large percentage of characters considered male, Ho Yay and Foe Romance Subtext collapse into themselves in an explosion of pink energon, purple Big Bads, and *ahem* brotherhood.

Might as well put it all together in one easily accessible page. You know, for efficiency.

open/close all folders
Megatron/Starscream
It is a truth universally acknowledged that a Megatron in possession of an Evil Plan must be in want of a Starscream to have domination-innuendo with.
Megatron/Optimus Prime
It's rare for archenemies to escape some level of this, though Starscream usually monopolizes Megatron's bloodlust.
Advertisement:
Starscream/Skyfire
Beast Wars
Megatron/Everyone Else
You don't become the dynamic new leader of the Decepticons/Predacons without some subordinate excuses. Yesss...
Lockdown/Prowl
Rest of TFA
Advertisement:
Miscellaneous G 1
Transformers Zone
.
Robots in Disguise 2001
.
Bayverse
Transformers Prime
All IDW
.
Rescue Bots
Robots in Disguise 2015
Transformers Cyberverse