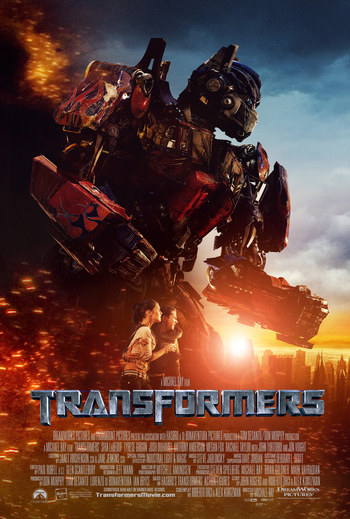 Their war. Our world.
Optimus Prime: At the end of this day, one shall stand, one shall fall.
Megatron: You still fight for the weak! That is why YOU LOSE!
Advertisement:

Note: This is about the 2007 live action Transformers film. For the 1986 animated Generation One film, see The Transformers: The Movie.

The first in the Transformers Film Series, live-action films based on the long-running Transformers toyline and television series. Produced by Steven Spielberg and directed by Michael Bay.

Our protagonist is teenager Sam Witwicky (Shia LaBeouf). He wants his first car to impress "evil jock concubine" Mikaela (Megan Fox), who turns out to be rather talented with cars. He ends up getting a beat-up yellow Camaro. But it turns out the car chose him; it's one of many sentient alien robots who can "transform" and disguise themselves as human vehicles. His name's Bumblebee, an advance scout for the Autobots, a noble faction from the planet Cybertron whose mission is to protect Sam from another faction, the evil Decepticons.

On another front, a US military base is attacked by agents of the Decepticons, with the sole survivors handling valuable information on whom they are fighting and how they can stand a chance at fighting back. At the same time, a Pentagon analyst finds evidence that there is a Government Conspiracy that knows more of what is going on than anyone else. These plotlines converge as Autobot reinforcements led by Optimus Prime arrive on Earth and tell Sam his family heirloom holds answers to the location of the AllSpark, a powerful artifact responsible for the Transformers' existence and lost for thousands of years. The two factions battle over it: the Autobots want to return life to their dying world, while the Decepticons seek to exterminate their enemies.

The film was announced as a co-production of DreamWorks and Paramount. During pre-production, the latter acquired the former, thus when the third film in the franchise was released in 2011, it was solely a Paramount presentation, a result of DreamWorks being reformed as an independent entity in 2008, with Paramount keeping its library up to that point. Paramount's involvement came in part because they had recently made a deal with Hasbro to distribute home video releases of several animated films and TV series based on Hasbro properties, including Transformers: Energon and Transformers: Cybertron (these rights are now held by Shout! Factory).

"With the AllSpark gone, we cannot return life to our planet. And fate has yielded its reward: a new world to call home. We live among its people now, hiding in plain sight, but watching over them in secret, waiting, protecting. I have witnessed their capacity for courage, and though we are worlds apart, like us, there's more to them than meets the eye. I am Optimus Prime, and I send this message to any surviving Autobots taking refuge among the stars: We are here. We are waiting."