Megatron: Is the future of our race not worth a single human life?
Optimus Prime: You'll never stop at one. I'LL TAKE YOU ALL ON!
—Transformers: Revenge of The Fallen
open/close all folders
2007 live-action film

At the end of this day, one shall stand, one shall fall.
Advertisement:
Works With Their Own Pages
Dreamwave Transformers comics 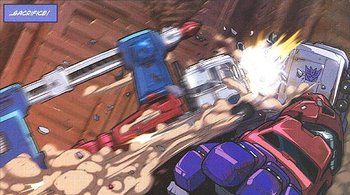