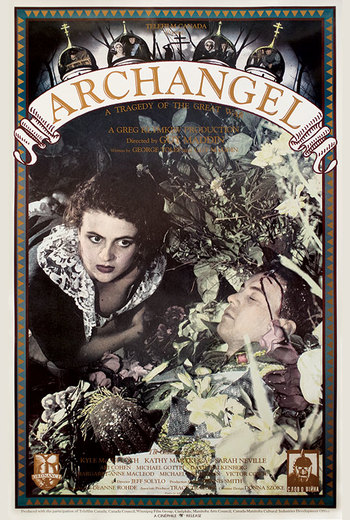 Archangel is a 1990 film directed by Guy Maddin.

The film is set in the Russian port of Archangel in 1919. One-legged Canadian officer Lt. John Boles has come to Archangel, in the Russian far north. He has as part of the Allied intervention in the Russian Civil War, on behalf of the Whites against the Bolsheviks. Boles himself cares little about the Reds or the Whites, being deep in mourning for his lost love, Iris. (How deep? He's toting around her ashes in an urn.)

Boles lands in Archangel and is billeted with a peasant family; the mother, Danchuk, is immediately attracted to him. Boles meets a local woman, Veronkha, and is shocked to see that she is the spitting image of his dearly departed Iris. He faints, and when he wakes up he believes that she is Iris. Meanwhile, Veronkha has a husband, Philbin, who was injured in the war and suffers amnesia.

Filled with bizarre imagery, surrealism, stilted acting, and deliberately low-budget effects, all of which would become the Signature Style of Guy Maddin.