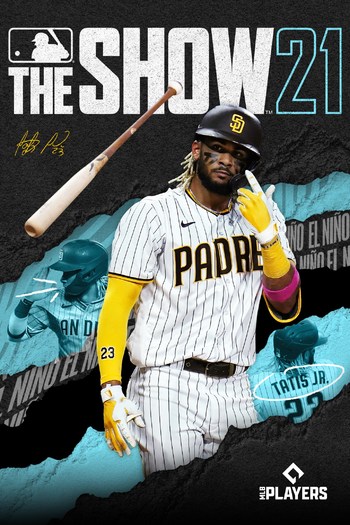 Everybody Loves The Show.note San Diego Padres shortstop Fernando Tatís Jr. on the cover of MLB The Show 21
Welcome To The Show
—Current tagline
Advertisement:

MLB: The Show is a Major League Baseball video game series produced by SIE San Diego Studio, a development team that is part of SIE Worldwide Studios. The series debuted in 2006 for the PlayStation 2 and PlayStation Portable (though it's technically a continuation of the older baseball sim series that began in 1997 on the original PlayStation; that phase of the show was simply titled MLB followed by the year). There has been a new release in the series every year since 2006, with '11 being the last PS2 version. The series was on the PS3 from '07 to '16, with '17's release being the first on the PlayStation 4 exclusively.

The main feature of the franchise is the Road to The Show. The player makes their own Player Character from scratch to guide from tryouts in Baseball City, Florida, through the MLB draft, through any given team's AA, and then AAA, affiliates, until finally you get to the titular Show itself, the major leagues. Aside from online multiplayer, another unique mode is Diamond Dynasty, wherein you create your own MLB team (logos, uniforms, location, etc.) and wage war against the other 30 MLB franchises to become the #1 baseball team in the entire country.

On December 9, 2019, it was announced that MLB: The Show would be ending its PlayStation exclusivity as soon as 2021 (see Last of Its Kind below). The first game post-exclusivity,

MLB: The Show 21, was released on PlayStation 4, PlayStation 5, Xbox One, and Xbox Series X|S on April 20, 2021 with cross-platform multiplayer support. On January 31, 2022 it was announced that Nintendo Switch has joined the line of platforms starting with MLB: The Show 22. Cue the Flying Pigs.

This Series Contains Examples Of...