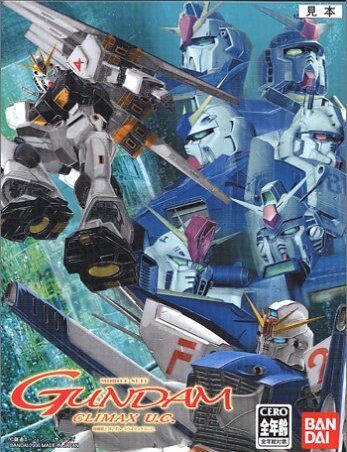 Mobile Suit Gundam: Climax U.C. is one of the many games based on the UC timeline of the Gundam series. The game contains mobile suits from the One Year War to Crossbone Gundam. The game was released in 2006.

Climax UC has four modes: Chronicle Mode, Progress Mode, Extra Mode and Vs Mode. Chronicle Mode lets you play as the main characters of each series and follow their storyline. Progress Mode allows you to make your own character and play through the game as a grunt . Extra Mode lets you play through different scenarios. Vs Mode is exactly what is sounds like. The game is relatively unknown, but one of the better Gundam games.

Tropes specific to the Progress Mode:

In this mode, the player plays as a pilot named Kamuna and his participation in some of the key conflicts of the Universal Century. The order of levels is