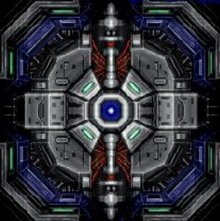 A Shoot 'Em Up made by SITER SKAIN in 1999 and part of The Tale of ALLTYNEX trilogy, Kamui has been often described as "a more intense RayStorm clone". The gameplay is slightly different from the "standard" shoot 'em up: the ship — the eponymous Kamui fighter — is not a One-Hit-Point Wonder, and it has two special weapons beyond its main Spread Shot: a powerful Wave-Motion Gun that can cancel bullets and a "lightning storm" weapon that targets enemies below the fighter where its main weapons cannot reach. Both run off the same energy gauge, which must recharge after each use. It is short, but very fast-paced and relentless in difficulty.

Although one of the earliest games released by SITER SKAIN, its story actually takes place after several of their other titles; both ALLTYNEX Second and RefleX are prequels to it. During the Time Skip in RefleX, a scientist named Xaffiquel de Alice drafts a theory regarding "Brain Fusion" technology, which would allow a psychic human's mind to be permanently uploaded into a computer. The military sees the potential to create super-weapons using this theory. In desperation due to the ZODIAC's battling it out over Earth, eight "Kamui" fighters and a massive automatic defense army, commanded from the "Mechanized Temple", are created using this technology. Among the humans uploaded into those fighters was Xaffiquel's own daughter, Panafill de Alice. Enraged at the loss of his daughter, Xaffiquel decides that humanity has grown too corrupt and must be punished. Uploading his mind into the orbital fortress as "the Adjudicator", he waits for civilization to rebuild itself before unleashing the destructive might of the Mechanized Temple and Neural Network based on the ancient genocidal supercomputer, ALLTYNEX.

Now Panafill, who managed to escape the rebuilt ALLTYNEX's control due to having been conscious during her upload, must destroy both ALLTYNEX and the Adjudicator to prevent mankind's destruction.

(requires v1.10), making it the first game in the series to be fully translated. This doesn't really matter anymore, as Nyu Media localized and published

Kamui along with the rest of the ALLTYNEX trilogy in June 2013, and is available for purchase through various digital distribution sites.

Has nothing to do with Kamui Gakupo, the Kamui uniforms, or Kanna Kamui.

Such had been the final deranged act of the man that became the Adjudicator...