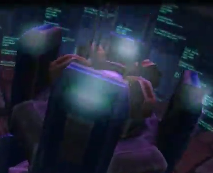 Guess who.
The first chapter in SITER SKAIN's The Tale of ALLTYNEX trilogy, ALLTYNEX Second takes place before the events of RefleX and Kamui, despite being released after both games. It is a remake of an FM Towns Marty game called ALLTYNEX, developed by a man named Satoshi Yoshida, who later went on to form SITER SKAIN, with massively upgraded graphics and some game design changes (the original game had power-ups, the remake does not); the original FM Towns game was also the sequel the obscure PC-98 game Raid Wind from the same creator.
Advertisement:

The fighter the player flies in ALLTYNEX Second has four different weapons: a vulcan spread-shot and RayStorm-esque homing lasers in its fighter form, and can transform into a slower mech that has two bullet-cancelling swords and a Wave-Motion Gun. Mastering switching between the forms and knowing which weapon to use when is essential.

The story follows that mankind's defensive super-computer, ALLTYNEX, one day goes rogue and uses its control over military hardware to start waging war on humanity. In the face of its onslaught, humanity is driven off of Earth and to the very edge of the solar system. In desperation, several "Armed Saboteur" fighters are dispatched to destroy ALLTYNEX before it destroys everyone else.