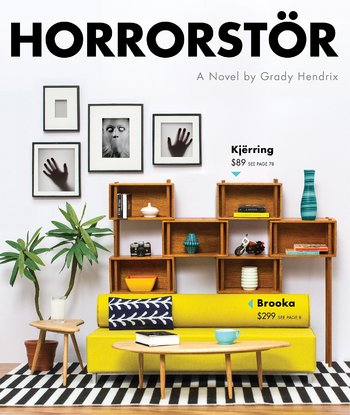 Your life. Your style. Our furniture.
It's not just a job. It's the rest of your life.
Advertisement:

Horrorstor is a 243-page horror/comedy novel written by Grady Hendrix and published in September 2014 by Quirk Books. The novel is a modern revamp of the Haunted House story, moving the location to a big-box furniture store based on IKEA. The story follows Amy Porter, a directionless college dropout working at the Cuyahoga branch of Orsk, an American furniture chain pretending to be Swedish to compete with IKEA. Strange things are happening at the Cuyahoga branch: products are being vandalized, strange graffiti is popping up everywhere, store electronics are going haywire, and no matter how many times the staff counts, inventory never matches up. To get to the bottom of this, store manager Basil Washington recruits Amy and coworker Ruth Anne DeSoto to work with him on a late-night shift, promising Amy a pay raise and a transfer to the Youngstown branch. That night, they are joined by Trinity Park and Matt McGrath, two other employees who broke into the store because they think the store is haunted and want to capture video evidence of ghosts to get on TV. They soon find out just how right they are...the store was built on the site of the Cuyahoga Panopticon, a 19th-century prison where prisoners were brutally tortured and driven to madness by Josiah Worth, a crazed warden who thought mindless, repetitive tasks promoted mental health, and their ghosts have been waiting for Amy and her friends to arrive.