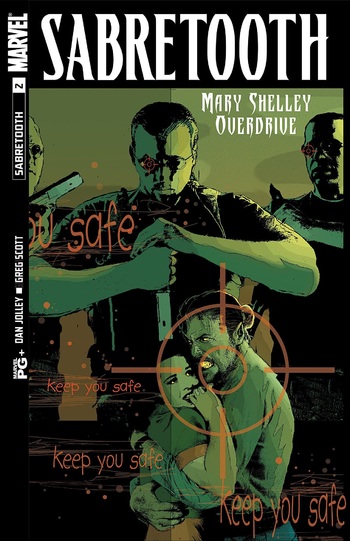 "It makes sense. Design your own product, control your own distribution, answer to nobody. Be your own enforcers, cut out the middle man. And running around in those skins—that's gotta be some big fun, don't it? Make you feel like stud-bulls again? How long's it been since you could get it up, Doc?"
—Sabretooth
Advertisement:

A tragic tale that elaborates on a more hidden side of Sabretooth that is seldom seen. This story follows Victor as he tries to learn the secret of these mysterious soldiers he encounters during a hit one night. The strange men are after a young woman named Bonnie Hale, whom Victor saves in order to get information.

It doesn't take Bonnie & Sabretooth long to grow close and consummate a relationship as he spends the night trying to protect her from the men who want her dead as well as get answers on just why they're after her. We see the bonds Victor is capable of forming and just how far he's willing to go once said bond is established.