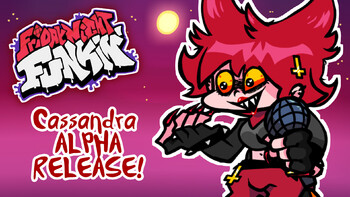 "To be honest, I don't give a shit about this society crap. I've got other plans for this world."
"A disgusting spoiled bitch that was loved in the family and got whatever the FUCK she want with no consequences. I always saw it in her eyes that she wanted everything for herself!"
— Cassandra's opinion on her sister, Girlfriend
Advertisement:

VS Cassandra is a Friday Night Funkin' mod created by RamenNoodiles, MagnusStrom, and TheFlipMan using the Project FNF Engine. After the events of Pico's past revolving around the school, the evil rival to Pico strikes back again from the dead years later with a brand new look! Instead, she's going after our favorite blue-haired rapper for dating her sister, Girlfriend. Apparently, Cassandra had some past beef with her and tries to convince Boyfriend that she's no good to date. Will you defeat her and save your Girlfriend? Or will you understand the perspective of the red-headed goth? It includes three songs, Berzerker, Possession and Takeover.

There's a lot hidden under the surface, With the creator, Ramen Noodiles, posting videos about the lore, The playlist for that, and the mod's songs, can be found here.

There's also plans for a week 2, with Cassandra rap battling against Pico.

The mod can be downloaded on GameBanana here.