Web Video / Sonic the Other Movie 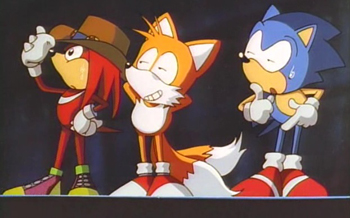 Sonic the Other Movie is Reputable Dubbing Pictures' first series, released across the latter half of 2014. It is a four episode Gag Dub of Sonic the Hedgehog: The Movie, created by KyoSo (going by "Smegerama" at the time). The Other Movie is an abridged series in name only, being nearly uncut with the original story intact and minimal fourth wall breakage. Instead, treating itself much like its own show and not simply a parody of something else, the humor focuses on the dysfunctional characters, their interaction and tons of (occasionally elaborate) visual gags.

All four episodes, The One Where Old Man Owl Kills Everyone, Highway Hootenanny, Toot Toot Sonic Warrior Doppelganger Time, and That Damn FOURTH Episode can be found on the official playlist here.

Sonic the Hedgehog is a dick and his sidekick Tails the Fox, despite being a sniveling coward when faced with danger, desperately wishes he could take over Sonic's job. Once they are called to action by President Robotnik who claims his giant metal brother has incorrectly installed a nuclear reactor that could meltdown at any minute. Joined by the totally radical Knuckles the Flying Mole-Person, our heroes fight Metal Robotnik despite being nearly defeated by his anus cannon. But, of course, all that was just a ridiculously circuitous ploy to pit Sonic against the Super Duper Metal Sonic, an exact duplicate of our titular hero in every way, including his obnoxious personality and fondness for saying "bitch". Meanwhile Old Man Owl, charged with looking after Sonic's place while he's away invites all his old army buddies over for a night of excitement and debauchery.

The four episodes were released on June 26th, August 6th, October 6th, and December 26th of 2014. On April 20th 2015 a Director's Cut of episode 1 was released to improve the quality of the editing and add some additional jokes, including a scene-length stinger.

It was followed up in 2016 with Xonic S, and take a wild guess what that tackled.

The overall abridged series features tropes such as:

Specific episodes of the series provide examples of: