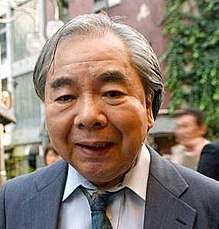 Junpei Takiguchi was a veteran narrator and voice actor born on April 17, 1931 in Chiba Prefecture. He began his work since the 1950s and often voiced characters who is a Mad Scientist or Big Bad (or a commanding officer of the Big Bad), especially if they are obese, but also good old men and non-human characters. Unfortunately, Takiguchi died August 29th, 2011 of stomach cancer at age 80.

Not to be confused with Kappei Yamaguchi.