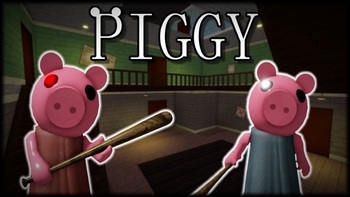 Do you have what it takes to escape Piggy and uncover the mysteries surrounding the beast?
Advertisement:

Piggy is a Survival Horror game created by MiniToon

on Roblox. Originally made as a Lightmare Fuel parody of Granny and Peppa Pig, you play as a police officer searching for a missing boy named Georgie Piggy. Upon arriving however, you hear a snort right behind you and are knocked out. Waking up in the Piggy household, you discover a monster roaming the building, and must escape before the timer runs out.

Piggy: Hunt, a spin-off game with gameplay similar to Among Us, set to release on Steam Early Access the following September.

You can play the original game here

, and view the Steam page for Hunt here