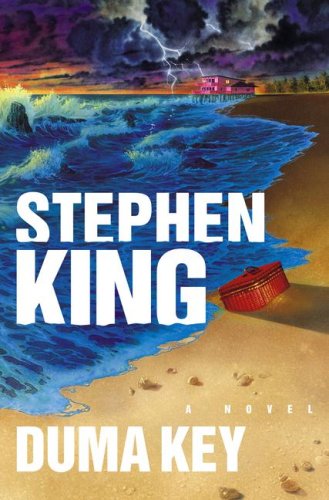 Duma Key is a novel by Stephen King, published in 2008. Though mainly a Psychological Horror story, it also includes quite a few of King's trademark supernatural elements.
Advertisement:

In the book, Edgar Freemantle, a retired building company owner from Minnesota, gives an account of a chain of events that formed the strangest year in his life. Freemantle tells the story of events that took place four years ago on the little Floridan island, Duma Key. The prelude to this, happening some months before, occurs when Edgar is almost crushed to death in an accident with a crane. During the process, he loses his right arm, damages his hip, and suffers from loss of vocabulary and memory, and becomes prone to intense and violent fits of anger, especially when his injuries are causing him trouble.

After the accident, Edgar's wife, Pam, leaves him after he hurts her during his mood swings, and the depressed Edgar is playing with thoughts of suicide. His psychologist, Dr. Kamen, advises him to try and settle down somewhere new for a year and cultivate his old hobby of sketching.

After browsing brochures Edgar feels strangely drawn to the island Duma Key, and with the help of Jack Cantori, a local college student, he moves into a rented house named Salmon Point (which Edgar nicknames "Big Pink"). As part of his healing process, Edgar starts drawing pencil-sketches and taking walks on the island, during which he meets and befriends Jerome Wireman, a former lawyer and the caretaker and hired companion of Elizabeth Eastlake, the old woman who owns all the houses on Duma Key and suffers from Alzheimer's disease.

As his painting progresses, Edgar starts feeling weird itchy sensations in his missing arm, and discovers that this is giving him the ability to make some really good, but also very spooky paintings, some of which appear to be windows into the past, while others can outright warp reality and initiate life. But is it really Edgar himself who is the mind behind these paintings, or is it something else? Something sinister? And could it somehow be related to the rumors about the terrible things that happened on Duma Key in the 1920s? And just who is the feminine figure in the red cloak who appears on Edgar's paintings?