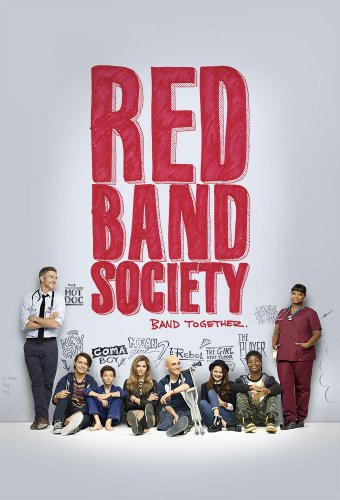 "Everyone thinks that when you go to a hospital, life stops. But it's just the opposite — life starts."
—Charlie
Advertisement:

Red Band Society is an American comedy-drama television series on FOX developed by Margaret Nagle. The series premiered on September 17, 2014, put on hiatus after the tenth episode on December 3, 2014, and effectively ended on February 7, 2015.

Based upon the Catalan drama series Polseres vermelles, the series is a dark dramedy focused on a group of teenagers living together as patients in a hospital's pediatric ward.

Interestingly, one of the show's executive producers is none other than Steven Spielberg.

Red Band Society was highly anticipated to be a major headliner for FOX in the 2014-15 season. It instead got Screwed by the Network, having been scheduled on Wednesday nights at 9:00pm alongside ABC's (who, coincidentally, co-produced Red Band Society) Modern Family, CBS's Criminal Minds and NBC's Law & Order: Special Victims Unit. Ratings were abysmal, and fell further behind when FOX preempted the series for two weeks to cover the 2014 MLB World Series. FOX lost confidence and canceled the series after ten episodes. On January 31, 2015, FOX decided to air the eleventh episode, finally letting the series end a week afterward.