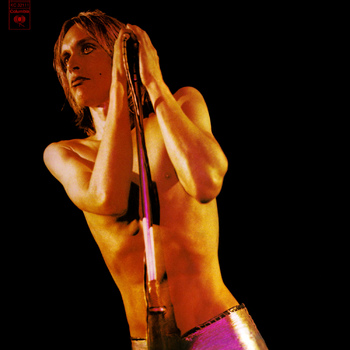 Your pretty ears are going to Hell!
Advertisement:

Raw Power is the third studio album by The Stooges, released in 1973. It was co-produced by David Bowie at a time when the band had been dropped from their original record label and were suffering from severe heroin abuse. Bowie's help proved to be the band's saving grace, resulting in a magnificent swan song for The Stooges who would disband soon afterwards. It is their first studio album without bassist Dave Alexander, and the first with guitarist James Williamson, which led to Ron Asheton switching from guitar to bass. It also turned out to be their last album in 34 years, the follow-up (The Weirdness) being released in 2007.

However, when Raw Power was released in 1973 it received mixed reviews and didn't sell particularly well. Only when Punk Rock broke through in 1977 did it catch on as an early progenitor to the genre.

The album was remastered by Iggy in 1997, resulting in a prime example of the Loudness War and a serious backlash from fans (in fact, it's widely considered to be one of the loudest commercial audio releases ever made). In 2010 it was remastered again in a less headache-inducing version. Then both Iggy's and Bowie's mixes were remastered again for a 2012 vinyl edition that completely averts this trope and is probably the best-sounding version of the album released to date.