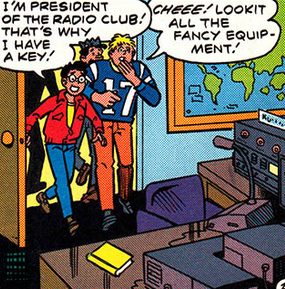 Radio stations in colleges and universities, often portrayed as a couple of students working as unpaid volunteers to try their hand at being an announcer or talk show host, which is usually Truth in Television. The students are probably majoring in communications or a related field, although oftentimes, there won't be enough communications students to fill the roster, so students from other departments are allowed to take air shifts. College radio stations are very rarely a high priority.

There was a time when college radio, even at state colleges in fairly conservative states, was both the last bastion of truly unadulterated '60s liberal radicalism in both the media and within the university system, and the proving grounds for many a genre of music that eventually became mainstream, such as Alternative Rock, Indie Pop and rock, and Hip-Hop. The Golden Age of sorts for college radio was in The '80s, before NPR really took off as a major force in "alternative" radio. Nowadays, college radio is still going strong, even if the Internet has mainly taken over the once-pivotal role that it played in the development of pop culture. However, they are still a useful source of underground music.

In fiction, the college station is something that either everyone listens to, or no one does. Either the whole campus (and no small number of people in the school's metropolitan area) tune in to the station, or the astonishingly low listener base becomes a Running Gag. The output will generally either be mind-numbingly boring or Large Ham Radio.

If the school has an Absurdly Powerful Student Council, this will most likely be either its tool or its greatest rival; see also the School Newspaper Newshound.

Community radio stations can also act as college stations, and there are (or were) a few campus/community stations. Some allowed non-students and high school students to participate. One could really learn the details of how radio works, essentially getting a Columbia School of Broadcasting education for free.