Western Animation / Aladdin and the Adventure of All Time 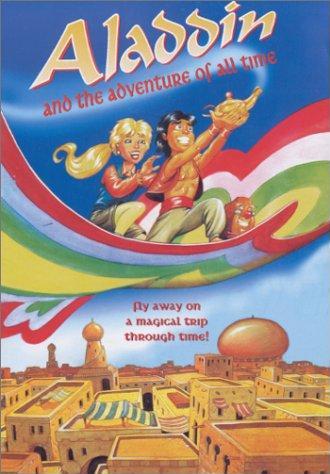 Aladdin and the Adventure of All Time is a 2000 Filipino-American Direct to Video animated musical film produced by cult director Roger Corman (his second and final attempt at producing animation after 1974's Down and Dirty Duck) and featuring an ensemble of well-known voice actors, including E.G. Daily (singing provided by Hynden Walch), Susanne Blakeslee, Cathy Cavadini, Jim Cummings and Danny Mann.

The wicked Scheherazade rewrites famous stories to her liking, which sends Aladdin into the "real world", where a well-read young girl named Paige is pulled into a journey to fix the tales to restore order.

The film was received negatively for its plot, cliches and low-quality animation. It went unnoticed for the most part until reviewed by online reviewer Phelous in 2014, gaining an Internet notoriety. It's available in its entirety here