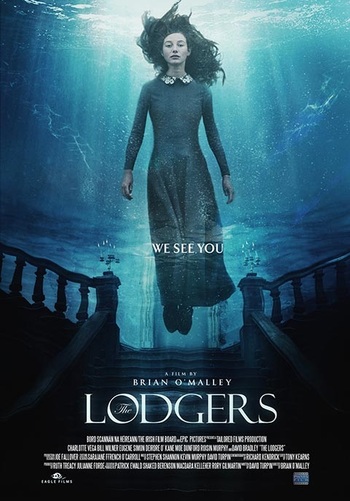 The Lodgers is a 2017 Irish gothic horror film by director Brian O'Malley and writer David Turpin. Charlotte Vega and Bill Milner star as Rachel and Edward, a mysterious pair of twins living in an isolated, dilapidated mansion, while Eugene Simon stars as a young, handsome-but-troubled war veteran who becomes drawn to Rachel.

The twins are bound to the estate - and to each other - by a dark family secret, a terrible curse, and the sinister, unseen presences (the eponymous "Lodgers") that emerge every night from the water beneath a trapdoor in the entryway. The Lodgers are keen to enforce the curse, including its three rules:

The film begins as two major crises converge, straining the twins' relationship. One crisis comes from outside: creditors are closing in and the twins will soon be forcibly evicted from the mansion to which their lives are tied. The other comes from below: the Lodgers are increasingly restless as the twins draw closer to their 18th birthday without fulfilling one of the abominable curse's key edicts. Time is running out and the likelihood of survival seems increasingly slim.