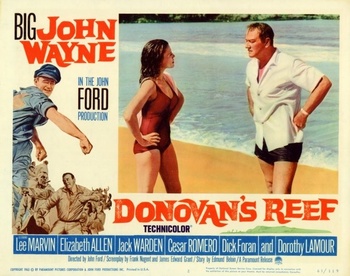 Michael Patrick "Guns" Donovan (Wayne) is a World War II navy veteran living on the fictional French Polynesian island of Haleakalowa, where he runs a saloon and shipping business while supporting the local economy and acting as an uncle and surrogate father to the children of his former commanding officer, Dr. William Dedham (Jack Warden), whenever the physician has to travel to the outlying islands for weeks at a time. Alongside that he's engaging in fistfights with his other war buddy, Thomas Aloysius "Boats" Gilhooley (Lee Marvin), or hanging out with the French governor, Marquis Andre de Lage (Cesar Romero).

All is well and good until Donovan receives the news that Dr. Dedham is a Disappeared Dad whose long-lost daughter, Amelia (Elizabeth Allen), is traveling to Haleakalowa to meet her father and gauge his moral standards (according to Boston) to determine whether or not he is fit to continue holding his shares in the Dedham family shipping company. Given that Dr. Dedham has three children with an islander mother, Amelia isn't likely to take that well, so Donovan pretends the kids are his own while Amelia is visiting in order to help protect his friend's reputation. Sparks, romantic and otherwise, begin to fly between the veteran brawler and the prim young lady soon after her arrival.