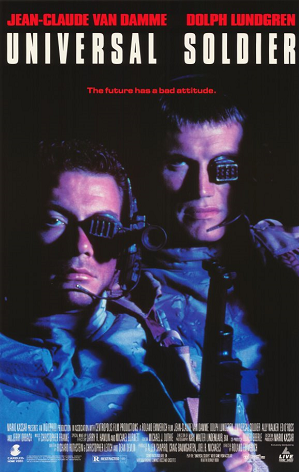 The film begins in 1969, during The Vietnam War. Private Luc Deveraux (Jean-Claude Van Damme) discovers that his sergeant, Andrew Scott (Dolph Lundgren), has killed his entire platoon and taken hostages. Deveraux confronts Scott and attempts to talk him down, only to fail, resulting in the deaths of the hostages. He then attacks Scott, and both men die in the ensuing fight. Their deaths are covered up, and their corpses are turned over to the secret "UniSol" program. Twenty-three years later, Deveraux and Scott are "universal soldiers" – cybernetic Super Soldiers. After a successful mission and an encounter with a reporter named Veronica Roberts (Ally Walker), Deveraux begins to have flashbacks to Vietnam and remembers fragments of his past life ... but so does Scott.

A novel adaptation was made to promote the movie.