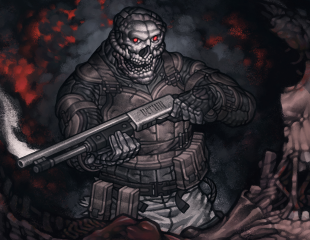 BUTCHER is a hardcore (in two ways) Abuse-style side-scrolling shooter developed with the involvement of Transhuman Design and Phobia Game Studio (the latter would which later bring us Carrion), released for the PC in 2016, pitting the player in the tiny pixelated shoes of a cyborg drone programmed to annihilate the last remnants of humanity.