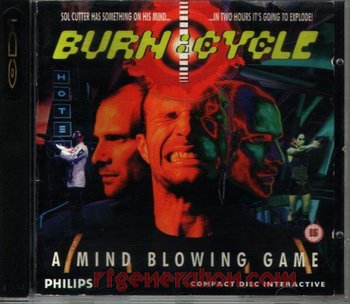 "It ain’t easy bein’ a two-bit thug in an eight-bit town."
Advertisement:

A 1994 first-person Cyberpunk Adventure Game which incorporates puzzles and Full Motion Video, similar to that of The 7th Guest. Regarded by retro gamers as a Cult Classic and one of the best games on the Philips CD-i.

You play Sol Cutter, a small-time thief who ferries stolen data inside of his brain (à la Johnny Mnemonic). While he's robbing Softech Industries, a deadly Computer Virus known as Burn:Cycle is downloaded into Sol's mind. It's dormant now, but if Sol doesn't get that virus out of his head within two hours, his brain is yogurt. This countdown occurs in real time, essentially boiling down the game to one big Timed Mission, but there are enough save opportunities to see gamers through.

Despite having decent graphics for the time and comparably-good acting, Burn:Cycle is infamous for both its kitschy aesthetic and nutty (yet oddly straight-faced) storyline. Sol's hard-boiled narration riffs on Blade Runner, and the colorful characters he meets along the way are arguably the game's biggest strength.