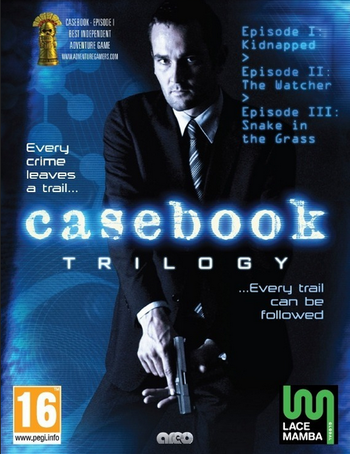 "Come on Partner. We got work to do."
— John Burton

The Casebook Trilogy is a Full Motion Video mystery game set in New Zealand. It is composed of three episodes named Kidnapped, The Watcher and The Snake in the Grass and was released in 2010 (though the first episode became available back in 2009.
Advertisement:

You play as a a rookie detective who is a man of few words. Your partner is Burton, a veteran of the force. The game starts off with you on your first day on the job trying to solve a Kidnapping Case. You mainly do so through taking photos of a fully 3d real life room. You then take those photos and have them examined by the Lab Rat and do minigames (more than 20 in total) to see results and match analyzed clues together.

The kidnapping from the first episode then leads to a murder investigation, and then things get even worse. Three more episodes were once planned to follow up the trilogy, but none have materialized by this point.