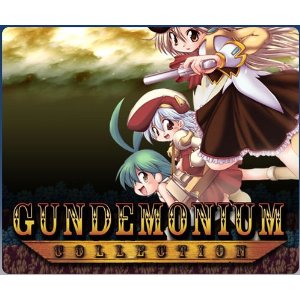 The Gundemonium series is a trilogy of doujin Bullet Hell Shoot 'em ups, originally made for PC by Japanese author Aeju Murasame (a.k.a. Platine Dispositif), the creator also behind Bunny Must Die. The series consists of these five games:

The plot of Gundemonium takes place in a Schizo Tech version of the 18th century where alchemy is a part of everyday life. In the year 1775, mankind found the Philosopher's Stones, dubbed Matrices, deep within the Spring of Yord. Their discovery led to great advancements in mankind's technology, but these advancements came at a cost. The Spring of Yord was located within the infernal plane of Que Pholith, and the taking of the Matrices aroused the wrath of its inhabitants, the Demonium, who entered the human plane and started wreaking havoc on mankind. Some humans eventually learned to harness the power of the Matrices and use them to fight against the Demonium. These people were called Matrix Masters. However, not even they could completely stop the wake of the Demonium army. By the time the 7th wave of the Demonium army, called Gundemonium, emerged from Que Pholith, humans created an artificial Matrix Master to try and turn the tables, using a human soul rather than a Matrix as energy source. This Matrix Master was called Elixirel, the Chrome Matrix Proxy.

However, the Demonium managed to kidnap Elixirel and turn her against her creators, making things even worse. In the year 1785, in one last, desperate attempt to fight back the Demonium, mankind threw everything it had to try to recapture Elixirel. In particular, the organization known as Rosenkreuz Foundation sent its best agents in a special mission to penetrate the Demonium lines and recover Elixirel at all costs. Of all the agents sent, Eryth Millfall (and in Recollection, also a few Artificial Humans based on Elixirel, the Earl Types) is the only one to survive the initial strike. It's all up to her to recover Elixirel and drive Gundemonium out of Earth.

Gundeadligne, a direct sequel to Gundemonium, takes place 10 years after the events of the original, which was dubbed Operation: Gundemonium. Eryth managed to kill Elixirel and recover her soul to undo the influence of the Demonium, and Gundemonium was successfully stopped, but the Demonium didn't stop their relentless assault on mankind. The elite of the Demonium army poured from the plane of Que Pholith and prepared to annihilate what remained of Earth and recover the Matrices. The Rosenkreuz Foundation planned a new counter-offensive. Many fighters and mercenaries of all kinds joined the effort, including Eryth, the Matrix Masters, and the newly resurrected Elixirel. Their objective: Destroy the Spring of Yord, the power source sustaining the portal that linked Que Pholith with the human world. Will they manage to drive the Demonium out of Earth once and for all, or will mankind succumb to the all-powerful horrors that delve among the greatest soldiers of the army of Que Pholith?

The third game in the series, Hitogata Happa, is a prequel of sorts. It takes place 20 years before the discovery of the Matrices, the Genoremasody Reich reigns supreme over East Prussia. With their superior technological and military power, they have started expanding over the country, destroying everything in its wake. In the middle of this chaos, a girl named Rosa Christofer struggles to survive, having lost her home and her family to the Reich's army. One fateful day she meets Kreutzer, a mysterious girl with a surprisingly high knowledge in the scientific and alchemical arts for her young age, who has created an array of flying dolls with special weapons. Kreutzer asks Rosa for help to fight back the Reich, and Rosa, seeing a means to avenge her family, accepts. They are massively outnumbered and outgunned, but they trust that the dolls will help them get the winning hand in their mission. However, not all is as it seems...

The fourth game in the series, Gundemonium Recollection, is actually a modernized remake of the first game, and serves as a retelling of the story told in the original Gundemonium.

The entire trilogy has been localized outside of Japan by doujin publisher Rockin' Android on June 1st, 2010 with the Gundemonium Collection, a compilation of the original pressings of the series in a single disc, fully translated into English, with a 24-page artbook that covers the entire series, and includes the series' original soundtracks. Rockin' Android later brought the series to PlayStation 3 as downloadable Play Station Network games on June 15th, 2010. The PC version of the Gundemonium Collection later got updated re-releases on Steam on September 27th, 2011 with a remastered soundtrack (DM Ashura of DanceDanceRevolution and beatmania fame remixed the Gundeadligne and Gundemonium Recollection soundtracks, while Hitogata Happa's soundtrack was remixed by Woofle

) and online co-operative play for Gundeadligne. On June 26th, 2012, Steam Editions of the Gundemonium series later made its way to Desura, while at the time featured as part of Indie Royale's Summer Bundle of 2012 along with Acceleration of SUGURI X-Edition HD, Serious Sam II, AirMech, Dino Run SE, Harvest: Massive Encounter, and The Journey Down: Chapter 1. On June 14th, 2012, Rockin' Android released both the original and arranged soundtracks of the Gundemonium series in digital form as an added bonus for those who purchase the Steam Edition re-release.

The Gundemonium Series provides examples of: