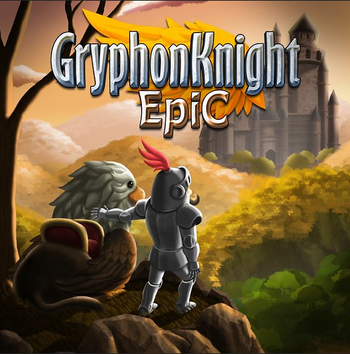 Gryphon Knight Epic is a side-scrolling Shoot 'Em Up by Cyber Rhino Studios. It was funded on Kickstarter on August 26, 2014, and released for PC through Steam on August 20th, 2015. On March 30th, 2016, it was also ported to PS4 and Xbox One.
Advertisement:

Sir Oliver is an accomplished knight. He's defeated a dragon, married a princess, and saved the kingdom. Now all that's left for him to do is kick back with his loyal Gryphon, Aquila, and enjoy the fruits of his labour.

Or at least that WOULD be the case had not his kingdom's former allies attacked him. Oliver is completely baffled that his friends would do this, but realizes that something must be up. So, he hops on Aquila's back, and the two of them set off on a quest to find out just what that something is.