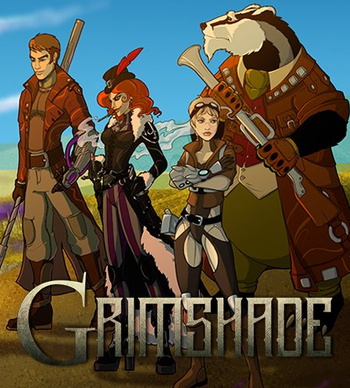 Grimshade is a Role-Playing Game with Turn-Based Combat, developed by a Russian studio TALEROCK. It was funded

on Kickstarter in 2018, and released for PC on March 26th, 2019. It is set in a Steampunk fantasy world called Ree'Fah, where implants or items allow users to wield light and dark either, and humans live side by side with Eleores, the general name given to the multiple species of anthropomorphic animals (who in turn call humans "Liv").

The story begins with a nation of Bespierre attacking its neighbour Brann. Both are majorly Liv; however, Brann still considers its Eleore inhabitants citizens, whereas Bespierrian laws enshrine discrimination against them, to the point it's legal to enslave them. While fending off an assault on his hometown, Brann warrior Alister Garuda is challenged by a Valkyrie - a Besperrian warrior riding a hoverbike. He manages to latch onto her ride, and fights her there, but is ultimately pushed off, and falls into the Forest of Shadows.

There, he finds a pile of dead bodies, all wearing identical cargo pants. Only one of them is still alive, and it's a boy named Kiba. He lost all his memories, but it soon becomes apparent he can interact with the flows of ether without needing any equipment. Alister pledges to deliver him to the city to get taken care of: what he doesn't know is that the boy got his powers due to a savage round of human experimentation, and the Mad Scientist responsible has no intention of letting his only breakthrough get away that easily...

No relation to another 2019 game featuring a lot of anthropomorphic animals, Eastshade.