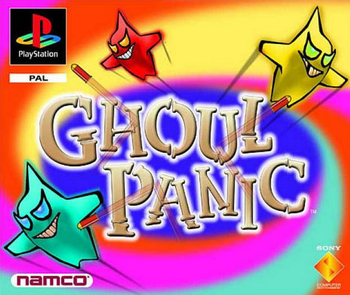 Ghoul Panic (Oh! Bakyuuun in Japan) is a Light Gun Game developed by 8ing/Raizing and released by Namco in 1999 in Arcade Game form, and then ported one year later to the PlayStation. It is considered a Spin-Off of the more popular Point Blank series of games, and in fact it has the same structure comprising various mini-games. This time it also includes full 3D graphics, boss battles and (in the PS1 port) an Adventure Mode.
Advertisement:

The game is about a witch's curse that turned people into cats. Kevin and Lisa are two kids who try to rescue them, but the witch caught them and turned them too into humanoid cats. Now they need to free the mansion not only from the ghosts but also from the family of monsters that inhabit it.

Not to be confused with Zombie Panic

or with Ghoul Patrol, the sequel to Zombies Ate My Neighbors.