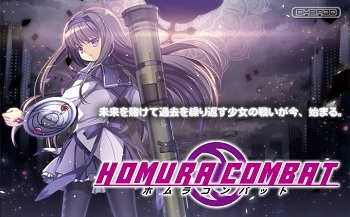 Homura Combat is a doujin third-person shooting game by OHBADO for Windows PC released in 2011. The game is essentially Puella Magi Madoka Magica meets Earth Defense Force 2017 and one of two Earth Defense Force 2017-styled doujin games released in 2011. Players take control of Homura Akemi as she lays waste to every familiar she comes into contact with. The twist in this game is Homura's time-stopping ability where the player can set-up attacks to take down enemies she encounters. Unlike DynaMarisa 3D, the game only consists of 12 stages and only 21 obtainable weapons, making it one of the shortest Earth Defense Force 2017-styled games around.
Advertisement:

On August 2012 during the 82nd Summer Comiket, the game received an Expansion Pack titled Homura Combat Blaze which adds extra missions (based after where the anime series ends), a retooled interface, and other added features. Unfortunately, the developers enforced on region-locking the game to prevent it from running on non-Japanese Windows operating systems. While this may prevent the game from being pirated from those outside Japan, it's also a big middle finger to importers.