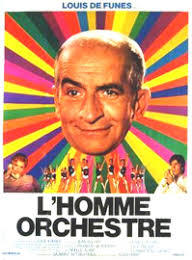 L'Homme Orchestre is a movie starring Louis de Funès as Evans Evans, a short-tempered and perfectionist artistic director and manager of an all-female ballet company .He is aided by his son Oliver casting as Evans's nephew Phillipe, the drummer of his company and a bit womanizing. He control all his dancers life from their weight to their romantic life and forbid men entering in the girl's lives: after one of them quits in order to marry, he quickly hire one young and promising dancer named Endrika to replace her. However, she has hidden her baby son she had and tricks Evans to think he is Phillipe's son when she is forced to have him back. Hilarity Ensues!