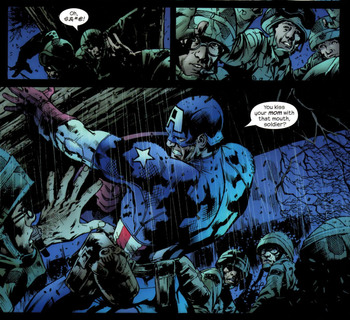 Is this really the right time to worry about that, Cappy?
Iron Man: SHIT!
Captain America: Language!
— Avengers: Age of Ultron
Advertisement:

So the author thinks a series where nobody ever swears would be boring. They think that normal people curse under certain circumstances, and it would make sense that their characters do. But they are not that dirty either, and they want to remind the audience to Do Not Do This Cool Thing. The solution? When somebody curses, someone else will tell him not to.

A frequent Hypocritical Humor variant is for one character to swear, and another to respond with "Watch your fucking language" or a similar line. May be enforced with the help of The Swear Jar.

This is not a Curse Cut Short, as the curse is fully said (sometimes, however, it is said in Symbol Swearing). Contrast Sir Swears-a-Lot.

This is usually a single guy's reaction in the heat of the moment. See Moral Guardians for those guys who make it their lifestyle to actively seek and silence profanity, and Culture Police when things go to dictatorship levels.

Also see Grammar Nazi and Grammar Correction Gag for the other kind of language police.

Bill is livid when he hears Cricket used a (kid-friendly) cuss word and passed it on to the choir, and is determined to stop him whether he wants to or not.

Bill is livid when he hears Cricket used a (kid-friendly) cuss word and passed it on to the choir, and is determined to stop him whether he wants to or not.