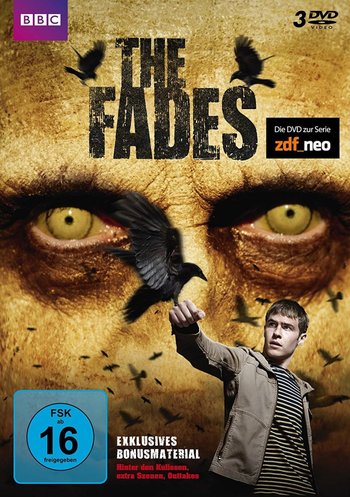 "The Fades are coming... It's inevitable."
Advertisement:

The Fades is a 2011 British Series about a young boy, Paul, plagued by pants-wettingly scarynote literally, for him dreams of the world covered in ash and ruin. While searching for materials for his best friends' amateur horror movie in an abandoned shopping centre, he stumbles upon much more than he bargained for: a crazed, dirt-covered man pointing a gun at him, a creepy girl only he seems to see and much more worrisome, a ghoul-like being that really doesn't look very friendly. As he ponders if his sanity has finally decided to fully leave him, he unknowingly involves himself in a struggle that may very well end with his dreams of the apocalypse becoming reality. The Fades are coming... It's inevitable.

A link can be found Here

to the program page

Now... who's seen my Back to the Future Boxset? Nanu-Nanu!