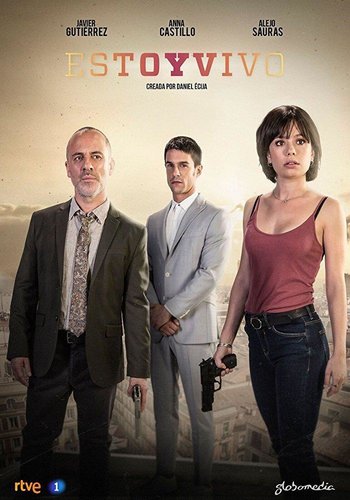 The guy in the left is the hero of the story... but oddly enough, he's dead.
Estoy Vivo (I'm alive), is a 2017 Spanish television series by Televisión Española.
Advertisement:

Andrés Vargas is a Spanish policeman investigating the case of a dangerous serial killer, El carnicero (The Butcher). On a chase in which he is left alone by his partner, Vargas drowns. He then awakes in a place called The Walkway, where he is told that his death was not meant to happen. Vargas wants to come back to his family, but he can only do it in a new body. Fortunately, a policeman called Manuel Márquez dies on his way to the police station for his first day of work, and so Vargas is free to enter his body. He finds out that five years have passed, and makes his goal to win his family back.

In his new life, Vargas will have the help of his Enlace (Liaison), an ally sent by the Walkway to check how he's adapting to Earth and help him out. Vargas will also have to work hand by hand with his oldest daughter, who has entered the police corps and is his new partner, and survive the (literal) demons haunting him.