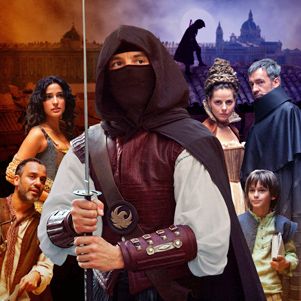 A ninja in the Spanish Golden Age? Oh well, why not?
Advertisement:

Águila Roja (Red Eagle) is a Spanish live action TV show about a masked hero who fights injustice in Spain, in the 17th Century. Best known for its use of Ninja motifs, the show is (according to an article in the Spanish branch

of Wikipedia) the most watched show in Spain's history, and also the most costly, with a budget of almost one million euros per episode.

The series tells the story of Gonzalo de Montalvo, a man who (after being forced into exile to the Far East) learns Ninja-like skills, and then returns to Spain - only to find his wife murdered by a conspiracy known as "La Logia" ("The Lodge"). Adopting the identity of Águila Roja, he fights the Sheriff Hernán Mejías, and investigates the Lodge's plans with the help of his mentor and father figure Agustín, and his servant and best friend, Sátur, a lovable scoundrel who adds a touch of humor to the otherwise dead-straight show - all while raising his young son, Alonso, who is unaware that his father is a hero. Other main characters include Hernán's Love Interest, Marchioness Lucrecia, and her young son Nuño; Gonzalo's sister-in-law, Margarita; Gonzalo's friends Cipri, Catalina, Inés and Floro; Alonso's friends Gabi and Murillo; the doctor, Juan; Cardinal Mendoza and his niece Irene; and the King of Spain.

It is eventually revealed that La Logia wants to kill the King, that Hernán is actually Gonzalo's brother, and that the King himself is their father. Later on we learn that Irene is Gonzalo and Hernán's sister and that Agustín saved Gonzalo, Hernán and their mother -who turns out to be alive- from Cardinal Mendoza as he wanted Agustín to kill them all.

The series ran for nine seasons between 2009 and 2016 and got a movie adaptation that first aired in April 2011. However, since the show was produced by the public TV channel Radio Televisión Española, it fell victim of the severe budget cuts by Mariano Rajoy's government in early 2012, and was on hiatus until May 2013, when its 5th season began.