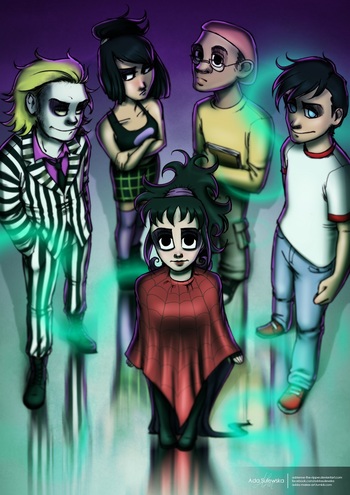 Death was a far too familiar concept to Lydia Deetz. Between her mother's death when she was younger, the haunted house she loves, her godparent-like ghosts, and her knowledge of various aspects of the Netherworld and the rules, she feels confident that she has a firm understanding of death and the dead.

But not all ghosts are the same as those she knows. And thanks to an accident and an aunt she's quickly growing to hate, she'll have the perfect chance to witness these other types of ghosts in Amity Park. Meanwhile, someone is plotting and a certain poltergeist refuses to let go.

Written by Bookworm Gal, the story can be found here

And while the author claimed there were no plans for a sequel, they weren't quite done with what became the Say It duology. A prequel story, Say It Again, is currently in the works and can be found here

. This story examines the bond between Lydia and Betelgeuse in the period between the film and the first story. How do they go from disliking/distrusting one another to regarding each other as best friends?

), was written for the BeetleBabes community's Halloween contest on DeviantArt. In this one-shot, set after the events of Say It Thrice, Lydia is celebrating her first Halloween in Amity Park, and her favorite poltergeist helps her carve some jack-o-lanterns.

Tropes found in the Say It Thrice include:

Tropes found in the prequel Say It Again include:

Tropes found in Just Say It include: