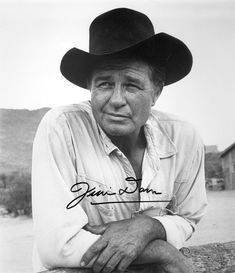 He got his first major role opposite Bette Davis in Winter Meeting (1948). The rest of his film career consisted of mostly TV series and B-movies, the vast majority of them being westerns. Either in films or series, he seemingly never got tired of playing cowboys or other western figures, even in pictures with such improbable premises as Jesse James Meets Frankenstein's Daughter. He also notably played U.S. senator John Hammond in the 1970s Conspiracy Thriller The Parallax View.

Then came Dallas. The role Davis is most fondly remembered for is without much doubt the cattle and oil baron and patriarch of the Ewing family, John Ross "Jock" Ewing, father of J.R., Gary, and Bobby. He played Jock until he was too ill from a multiple myeloma to perform, then after a couple of episodes where Jock was written as travelling abroad, The Character Died with Him.

Not to be confused with James Robert "Jim" Davis, the creator of Garfield.