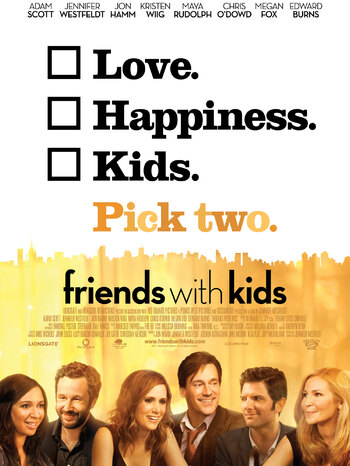 Friends with Kids is a 2012 Romantic Comedy film written by, directed by, and co-starring Jennifer Westfeldt.

Julie and Jason (Westfeldt and Adam Scott) are two single Manhattan yuppies and longtime platonic friends living in the same building. After observing their other close friend couples, Missy and Ben (Kristen Wiig and Jon Hamm) and Leslie and Alex (Maya Rudolph and Chris O'Dowd), pair off and have kids, Julie and Jason decide to conceive a child together so they can experience the joys of parenthood without the complications of being in a relationship. Surprisingly, complications ensue.