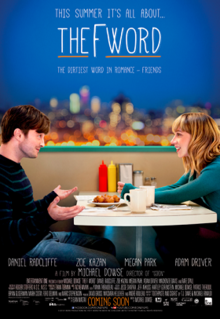 The F Word (released as What If in the United States) is a 2013 Irish-Canadian romance comedy based on TJ Dawe and Michael Rinaldi's play Toothpaste and Cigars and starring Daniel Radcliffe, Zoe Kazan, Megan Park, Adam Driver, Mackenzie Davis and Rafe Spall.

Radcliffe plays Wallace, a former medical student who has been a recluse for the past year due to the breakup of a relationship, and is attending a party with his college roommate, Allan, played by Driver. While at the party, he meets Chantry (Kazan), a quirky girl who can keep up with him quip for quip. At the end of the night, he walks her home, gets her number... and learns that she has a boyfriend. He discards her number, but chance brings them back together, and they become good friends, much to the chagrin of her five year boyfriend, Ben (Spall), who's convinced that Wallace is just nosing around Chantry in the hopes of sex. Clandestinely, Wallace continues to lust after Chantry, agonizing over how he enjoys being her friend, but truly wants more.

Then, Ben accepts an opportunity to go to Dublin for a U.N. conference on copyright law, causing Wallace and Chantry to have to confront their feelings for each other, and whether they really can just be friends.

Alternative Title(s): What If