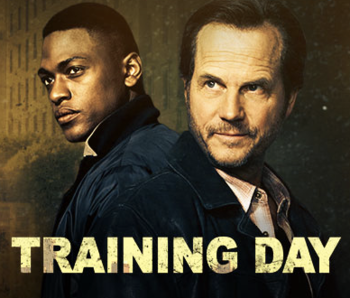 Training Day is a television crime drama adapted from the 2001 film of the same name. It stars Bill Paxton, Justin Cornwall, Katrina Law, Drew Van Acker and Marianne Jean-Baptiste. The show, which aired on CBS for a total of 13 episodes in 2017, was Paxton's last appearance in a TV series before he passed away.

Years after the events of the film, Officer Kyle Craig is a promising officer in the Los Angeles Police Department after joining the force to follow the footsteps of his deceased father, Billy. His actions in saving a young child from being killed catch the attention of Deputy Chief Joy Lockhart, who gives him the opportunity to infiltrate the LAPD's Special Investigation Section, which is led by Frank Roarke. Due to concerns that Frank may be using unorthodox tactics as a Dirty Cop, Kyle is given the job to investigate him and figure out if he's really gone rogue.

During the course of his assignment, Frank gets to help Kyle solve the mystery of his father and figure out what happened to him after he got shot with Frank's suggestion that the LAPD covered his death as a death due to a robbery gone wrong.