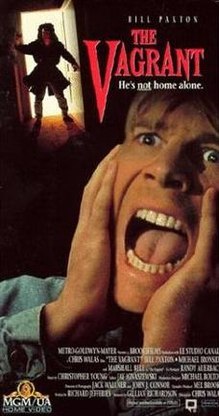 "There goes the neighborhood...one neighbor at a time."
— Tagline
Advertisement:

The Vagrant is a 1992 horror comedy directed by Chris Walas and produced by Mel Brooks.

Well-to-do yuppie Graham Krakowski (Bill Paxton) has just moved into a new house, where he discovers a filthy, disgusting homeless man (Marshall Bell) has been helping himself to the building's utilities. Graham succeeds in getting the vagrant arrested, but people around him start to turn up dead. The neurotic Graham worries that the vagrant is responsible, then begins to suspect that he himself is the murderer, committing the crimes in his sleep. Unfortunately for Graham, the police also believe he's the murderer...

No relation to the video game of the same name.