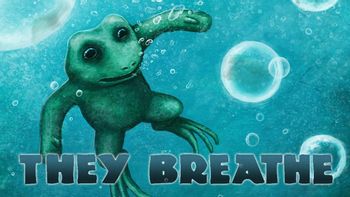 is an indie game developed by The Working Parts for Xbox Live, PC, iOS and Android, and was originally created using Adobe Flash. It's a short game, taking no more than half an hour to complete, but it's a remarkable study in atmosphere.
Advertisement:

You play as a frog who swims down into a submerged forest where something strange and terrible has happened. On the way you'll have to rescue your brethren from drowning, as well as avoiding hostile aquatic moose.

They Breathe includes examples of: