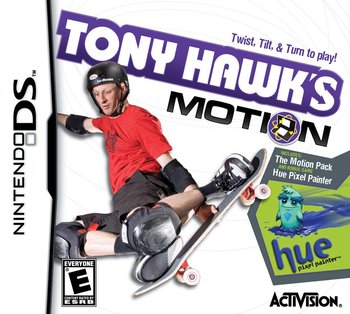 Hue Pixel Painter is a little-known Puzzle Platformer operated by motion controls. It was released in 2008 for Nintendo DS, and was only available bundled with Tony Hawk's Motion, which often caused it to be overlooked.

Unlike the Tony Hawk game on the same cart, Hue was designed to be controlled with motion. You control Hue by tilting your DS in the direction you want Hue to go, dodging over or around enemies, and trying to roll into blobs of paint, then use the trail of paint that follows you to connect a full circle of paint around an object to restore colour and the third dimension. In later levels this serves as the way to get to the less accessible areas, by surrounding the objects that will become platforms to the higher areas.

Hue controls similarly to a marble in a maze, and this is largely why D-pad/stylus controls aren't used, as they would make the game too easy. The game is also surprisingly deep: Some stages require you to navigate multiple paint spills off route to connect the circle and use the pieces of the level you've created to get further. Various obstacles, such as water, will erode your paint trail, creating natural mazes to navigate.

The game received the benefit of being seldom mentioned anywhere, despite being on the cover of another game, and actually having more gameplay than the main game that was sold with it, leading to more people playing the bonus game than the main game itself.