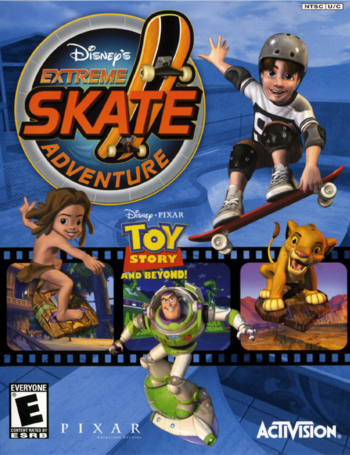 "I don’t wanna be told to grow up..."
Advertisement:

Disney's Extreme Skate Adventure is a Disney skateboarding game featuring characters from Toy Story, The Lion King and Tarzan, as well as several real-life kids (decided by a contest) as members of the Extreme Skate Crew. It was developed by Toys For Bob and published by Activision in 2003.

Effectively just a Disney-fied version of Tony Hawk's Pro Skater 4, being built on the same engine and using the same gameplay mechanics. There's even an option to switch between "Basic" controls and the standard Tony Hawk "Pro" controls.

The Disney segments vary in their content. The Tarzan levels contain a loose adaptation of the events of the film, with the player helping Tarzan's gorilla family as they encounter humans for the first time. The Toy Story levels have the player simply exploring Andy's Room and Pizza Planet before moving on to a sci-fi mission to Zurg's homeworld. Finally, The Lion King sees the player helping Simba's pride fend off the machinations of Scar.