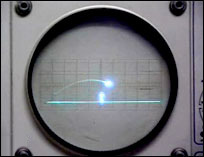 One of the first Video Games, from 1958. Tennis for Two is a Side View, Player Versus Player, tennis game. Created by physicist William Higinbotham to entertain visitors at Brookhaven National Laboratory in Upton, New York. Based on Brookhaven's military computers, which could calculate ballistics.