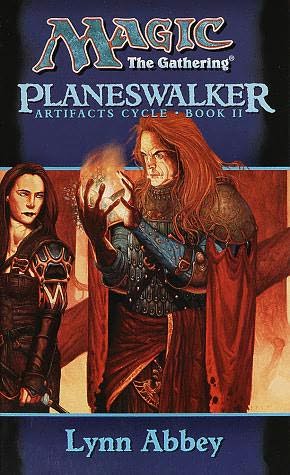 The war between Urza and Mishra is over. Brooding on the death of his brother at the hands of extraplanar forces, Urza drifts among the planes. But the end of the Brother's War has transformed him into something greater. Deep within his heart, a spark has been kindled to a flame that cannot be quenched. Urza has become a planeswalker.
Advertisement:

Planeswalker by Lynn Abbey is the second book in the Artifacts Cycle, corresponding to the black and white portions of the expansion Urza’s Saga. In the aftermath of the Brothers’ War, Urza has become a planeswalker. Driven mad by his brothers’ fate and the godlike powers suddenly granted him, he becomes obsessed with finding and destroying those who have corrupted his brother: the Phyrexians. The book is mostly told from the point of view of Xantcha, a defective Phyrexian newt who accompanies Urza on his journey across the planes.