Literature / Down and Out in the Magic Kingdom 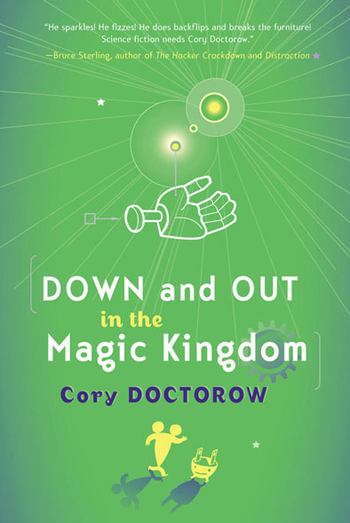 A novel by Cory Doctorow set in the future of the Bitchun Society, which has abolished conventional money (replaced by Whuffie, a complex reputation-based system), scarcity (cheap renewable energy and nano-assemblers), death (brain uploads and subsequent downloads to fast-grown clones), and government (entirely ad-hoc structures).
Advertisement:

The story chronicles one of a group of adhocrats running The Haunted Mansion at Disney World, trying to solve his own murder after he is killed prior to the hostile takeover of said attraction by another ad-hoc committee.